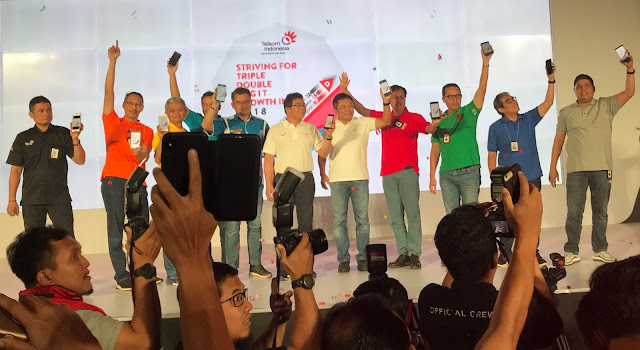 For the full year of 2017, Telkom Indonesia successfully booked strong set of results. Revenue grew by 10.2% YoY to Rp128.3 trillion, while EBITDA grew 8.6% YoY to Rp64.6 trillion and net income increased by 14.4% YoY to Rp22.1 trillion. In terms of profitability, net income margin increased 0.6ppt to 17.3%, showing that our profitability level can be well maintained. This strong financial result demonstrates Telkom’s ability to continue growing amidst tight competition in telecommunication industry.

The Company’s revenue growth was mainly contributed by Data, Internet & IT service revenue which grew by 28.7% YoY. This segment contributed 43.2% to total consolidated revenue, increased from 37.0% in 2016. The growth in Data, Internet & IT service is in line with the rising smartphone adoption, significant growth in IndiHome subscribers and increasing ICT solution services for Enterprise segment.

Telkom CEO, Alex J. Sinaga, mentioned, “The growing contribution from Data, Internet & IT services shows that the Company has been heading towards the right direction to become a Digital Telecommunication Company.” On the other hand, operating & maintenance expenses rose by 17.1% YoY, aligned with the aggressive broadband infrastructure development in backbone, mobile and fixedline segment.

Telkom’s subsidiaries, Telkomsel, managed to record revenue of Rp93.2 trillion or grew by 7.5% YoY with EBITDA and net income growth of 7.7% YoY and 7.8% YoY respectively. Amidst the challenging slowdown in cellular legacy business i.e. voice and SMS, as well as tightening competition in data business, Telkomsel could maintain its healthy profitability where EBITDA and net income margins still increased to 57.5% and 32.6% respectively. This shows Telkomsel’s success in managing its operating expenses.

On the operational side, Telkomsel served 196.3 million customers at the end of 2017. To provide the best service experience for its customers, Telkomsel is committed to continue building its infrastructure. This was done by establishing 31,672 BTS during 2017, all of which are 3G/4G BTS. At the end of 2017, total Telkomsel’s on-air BTS reached 160,705 units, 70% of which are 3G/4G. At the same time, Telkomsel’s 4G service has already covered 490 cities across Indonesia.

In fixedline business, Telkom continued to expand IndiHome fixed broadband service which showed positive result. At the end of 2017, IndiHome has almost 3 million subscribers, growing by 82.6% from last year. IndiHome recorded revenue of Rp8.2 trillion in 2017, increased by 48.1% YoY compared to 2016. The expansion in IndiHome business is expected to drive Telkom’s growth in the future.

Telkom’s performance this year was also supported by Enterprise segment which achieved
Rp19.1 trillion in revenue, grew by 21.0% YoY. Enterprise business is expected to keep growing in line with the rising trend of digitalization among corporates, government agencies, and SMEs in Indonesia.

“The development of IGG submarine cable from Dumai to Manado which connects SEA-ME-WE5 and SEA-US will strengthen Telkom’s network in an effort to become global digital hub,” stated Alex.