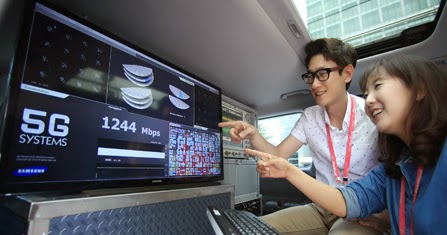 As you know, the big three telco operators in Indonesia have already implemented 4G services last year in some big cities, but last Thursday I received CommunicAsia 2015 invitation and one of interesting topics which will be presented in there is 5G Technology. What is 5G Technology?

According to white paper "Understanding 5G: Perspectives on future technological advancements in mobile" by GSM Intelligence which has released on December 2014 stated that discussion around 5G falls broadly into two schools of thought: a service-led view which sees 5G as a consolidation of 2G, 3G, 4G, Wi-fi and other innovations providing far greater coverage and always-on reliability; and a second view driven by a step change in data speed and order of magnitude reduction in end-to-end latency.

From analogue through to LTE, each generation of mobile technology has been motivated by the need to meet a requirement identified between that technology and its predecessor. For example, the transition from 2G to 3G was expected to enable mobile internet on consumer devices, but whilst it did add data connectivity, it was not until 3.5G that a giant leap in terms of consumer experience occurred, as the combination of mobile broadband networks and smartphones brought about a significantly enhanced mobile internet experience which has eventually led to the app-centric interface we see today.

From email and social media through music and video streaming to controlling your home appliances from anywhere in the world, mobile broadband has brought enormous benefits and has fundamentally changed the lives of many people through services provided both by operators and third party players.

More recently, the transition from 3.5G to 4G services has offered users access to considerably faster data speeds and lower latency rates, and therefore the way that people access and use the internet on mobile devices continues to change dramatically. Across the world operators are typically reporting that 4G customers consume around double the monthly amount of data of non-4G users, and in some cases three times as much. An increased level of video streaming by customers on 4G networks is often cited by operators as a major contributing factor to this.


The Internet of Things (IoT) has also been discussed as a key differentiator for 4G, but in reality the challenge of providing low power, low frequency networks to meet the demand for widespread M2M deployment is not specific to 4G or indeed 5G.

Many of the industry initiatives that have progressed with work on 5G identify a set of eight requirements:

I read from Mail Online that Nokia Networks has demonstrated speeds of up to 10 Gbps, while Samsung recently achieved 7.5 Gbps during tests. These breakthroughs are key to the development of a 5G network, and run on high levels of the spectrum. I believe that 5G will come to Indonesia around next 5 years or in 2020.
4G 5G connectivity Digital Platform English Mobile platform Tech and Gadgets technology