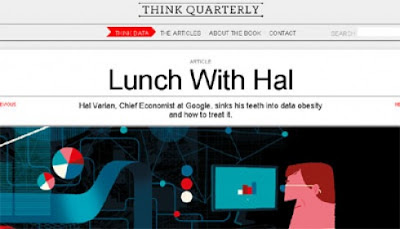 Think Quarterly first edition has come with 68 pages, most discussed topics around issues of business and technology, with a style of writing in-depth as it is commonly found in the BusinessWeek or Salon.

The writings in this edition are many written by reporters from other media, such as Simon Rogers (editor rubric Datablog in The Guardian), Ulrike Reinhard (editor of WE Magazine).

In a note on the magazine website, Google's director of operations for the UK and Ireland, Matt Brittin said Think Quarterly is the place to get fresh air in the middle of the fatigue and bustle of everyday.
Applications Business English Google Internet