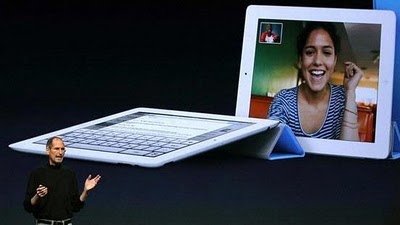 "We're not satisfied with our luck. Today, we will introduce iPad 2," said Steve Jobs. iPad 2 comes with a new design, with dimensions of lighter and lighter, but much better performance than the first generation.

Computational systems powered A5 dual-core chip that provides twice the speed and graphics chip that is claimed to give the performance 9 times faster, with the latest platforms IOS 4.3, and without sacrificing battery endurance. iPad 2 also is equipped with two cameras on the front and rear.

Interestingly, the iPad 2 is available in two colors, black or white, since the first day they become available in the market starting March 11, 2011 later. And that is not less important the price is not more expensive than first-generation iPad ie starting price of 499 U.S. dollar. While the 9.7-inch screen size remains.

Now, with the glorious capital, whether iPad 2 will as successful as its predecessor? Just wait. Because this year Steve Jobs had predicted would be the year of "copycat". Many competitors will imitate Apple step. However, Steve Jobs remains confident that 2011 will be a year iPad 2.
Apple connectivity English Gadgets iPad iPad 2 Tech and Gadgets technology