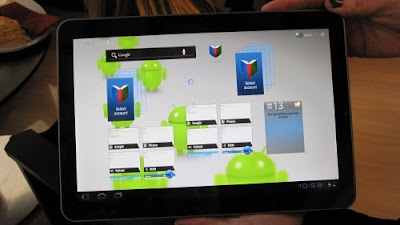 Samsung on Sunday launched a second tablet computer, with a larger screen and processing power that is stronger than the previous Galaxy Tab. Reuters writes that Samsung tablet computer, now can be the only true rival to Apple's iPad.

Galaxy Tab 10.1 is intended to be a multimedia center for game lovers, electronic books and social media. The screen is 10.1 inches (25.7 centimeters), multiple speaker surround-sound, with front and rear camera.

These tablets have a two core processor that is better in handling the media application. Galaxy Tab 10.1 also use the latest Google Android platform, Honeycomb - which has been optimized for the tablet.

The new tablets will be sold by Vodafone in over 20 countries before being released to another operator.
Android 3.0 connectivity English Gadgets Honeycomb Samsung Samsung Galaxy Tab Tech and Gadgets technology