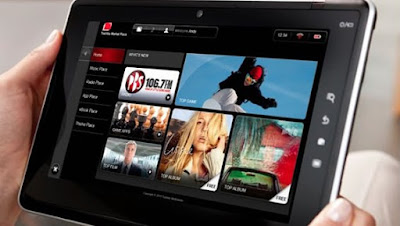 Tablet computers made by Toshiba has a screen width of 10 inches and runs with Honeycomb 3.0 Android operating system. Toshiba states that new homemade gadgets available at the beginning of this year and will be exhibited at the International Consumer Electronics Show (CES) in Las Vegas, USA.

Tablets which certainly has a touch screen feature is capable of playing high-definition video, web browsing, doing a variety of games and read eBooks.

Its weight is quite light, only 0.7 kilograms and embedded processor Nvidia Tegra 2. Internet connectivity can be made via Wi-Fi, but unfortunately have not been able to connect to a cellular telephone network.

As tablets in general, made by Toshiba tablet is also equipped with a camera facing forward and backward, as well as access to the store application. The plan, these tablets will be sold at a price of U.S. $ 499.

"This is the first tablet and we will continue to develop a family of tablets,"said Jeff Barney ,general manager of Toshiba's digital products in America .

Sales of tablet devices globally this year is estimated at more than 50 million units. Some competitors are already challenging the war against the iPad, including Samsung with Samsung Galaxy Tab, and that will be the data are Playbook from Research in Motion (RIM), and Hewlett-Packard. Until now, Apple has sold more than 12 million units in 2010 iPad.
connectivity English Tech and Gadgets technology