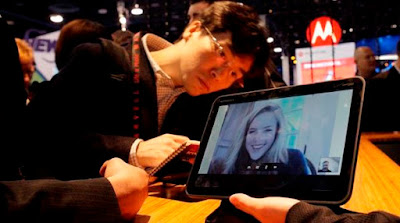 Each year, the Consumer Electronics Show (CES) led to the latest gadgets are sold in the market. Also in this year.

As quoted from Techradar, Here are the five best gadget during CES 2011.

1. Motorola Xoom
One of the killer iPad at CES 2011. Xoom is armed with dual core processors have a speed of 1 GHz. In addition, Xoom also powered by a memory of 1 GB, 32 GB internal storage capacity and can be enlarged by using the SD card.

For display, the Motorola set-size 10.1-inch LCD screen. Xoom also has two cameras, namely resolution 2 MP on the front and 5 MP in the back that accompanied the lights flash.

Honeycomb aka Android 3.0 is claimed to be the first Android operating system created specifically for the tablet. Xoom be special because the tablet first to adopt the Honeycomb.

2. BlackBerry Playbook
Other tablets are also present to kill the iPad. With processor dual-core Cortex A9, as well as 7-inch screen. Playbook will quench the thirst of BlackBerry users will be tablet PCs.

From the side view, the phone is still using Motoblur UI as the previous generation phone. This phone has 16 GB of internal storage capacity, and can be filled with a maximum of 32 GB memory card. Atrix estimated 4G comes first quarter of 2011.

4. Sony OLED 3D Headset
3D Headset Sony is shaped like a property in the movie Tron: Legacy. This device is suitable for use as 3D TV tech partner OLED, Plasma, LED and so on. The headset is packaged with two 3D OLED display resolution of 1280 x 720 pixels.