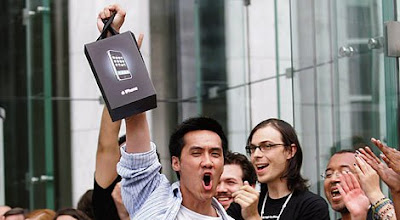 The dominance of Nokia in the mobile market back shaky world. In class smartphone, the Nokia N8 defeated sales of Apple's iPhone, as revealed consulting firm Morgan Stanley.

In the survey, conducted on 150 mobile phone shops across Europe, Morgan Stanley found that sales of the iPhone six times more than the Nokia N8.

Even so, according to Morgan Stanley sales N8 not as bad as imagined. It is estimated that Nokia will be able to remove 2.5 million units by the end of this year N8. While in the first quarter of next year is expected to reach 9 million units.

Patrick Standaert, an analyst at Morgan Stanley, said that the market share of Nokia increasingly eroded. If previously controlled 37 percent of the market are now staying 35 percent.

The owners of N8, according to Morgan Stanley, is satisfied with the performance of the smart phone. They are also not disappointed with Ovi application stores, though far less in number compared with the iPhone store.

Apple itself has released 14.1 million iPhones last summer and predicted that number will continue to swell in the first quarter of next year.
Business English Gadgets iPhone Nokia Nokia N8