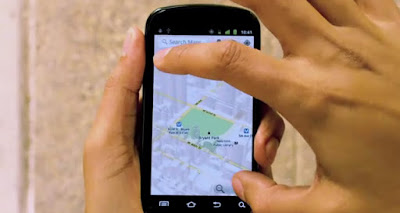 Google Map Service 5.0 can be accessed in a variety of devices using the Android platform 1.6 and later. The newest of the Google map feature this time is an additional three-dimensional (3D), compass and Offline Google Maps.

Offline Google Maps to display the image maps without connecting to the internet. The data presented is data that "raised" again, or has been shown before, using the phone's memory. Of course, this feature is useful for those who frequently access the same data and need 'guidance' direction faster than the need to connect first to the internet.

Map service that can be downloaded free of charge also uses vector graphics so that more measured reading of maps and clear in describing the condition of the original. Vector graphics is also possible that the original image map appear in the form of turned into a three-dimensional landscape. Unfortunately, for three-dimensional features can only be used on Android operating system 2.0 and later.
Applications English Google Google Maps