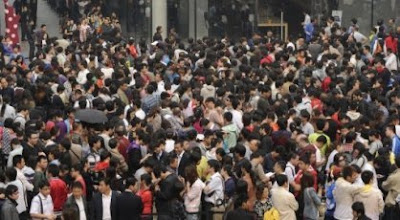 The launch of Apple's iPhone 4 in China on Saturday was a huge success. On the day of the launch was reported by CNN that there are more than 1000 people who make the queue at the Apple Store is located in Beijing Joy City shopping mall waiting for the store opened at 8 am. China Unicom also reported that there have been more than 200 thousand orders for the iPhone this 4 since before its release.

This condition is different from 180 degrees to the iPhone product launch in China the first time in November 2009. Proceeds from sales of the iPhone when it was very disappointing and reported by the China Unicom that at that time there were only 5000 people registered in the first four days of release.

IPhone Product 4 for the Chinese market this time is made without using wifi receiver at the request of the Chinese government. Selling price is also slightly lower than the iPhone's products are marketed in 2009. 32GB 3G iPhone device last year sold without a contract worth $ 1.033 while four 32GB iPhone now sells for 5999 yuan ($ 905) without contract. Meanwhile, the iPhone 4 16GB model sells for 4.999 yuan ($ 754).
Gadgets iPhone