Video Chat on iPhone 4 is a Leap from Apple 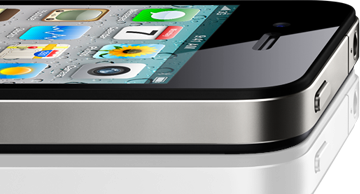 Apple has added a new feature on the iPhone is video chat, with the addition of this application users can retrieve and edit high-definition quality video and has a better screen resolution.

This handheld device will include more than 100 new features including a video camera in front to enable video conferencing between the user's iPhone. Especially with the support of a resolution of 5 MP, as well as a battery and a screen with higher resolution significantly.

iPhone 4, itself will be sold on June 24 in England, France, Germany, Japan and the United States. Priced at USD199 dollars to 16 gigabyte model and USD299 for the 32GB version.

As is known to increase the ability of the Apple iPhone 4, such as Apple thickness of 9.3mm, or 24 percent thinner than the iPhone 3GS. In addition, they also include a new camera with LED flash and black, the camera is also present in front of and behind the phone.

A4-chip processors in the iPhone is the smallest and has good power management. Moreover, Apple designed the micro-SIM to save space, mostly for a new battery which, combined with a new chip to power 40 percent longer battery.
Apple iPhone