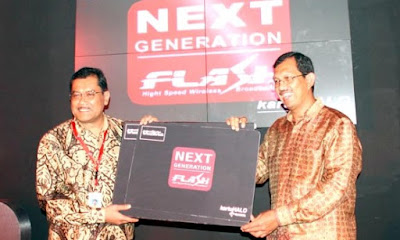 Telkom revenue growth from data, internet and technology to reach 45.9 percent. This growth was triggered by a significant increase in the number of subscribers.

Apparently, Telkom's new wave businesses continued to show results continue to rise. This is evidenced by increasing numbers of subscribers and users of broadband services, both fixed and mobile.

While revenue in mobile, Telkomsel grew 3 percent to Rp6, 7 trillion compared to the same quarter last year, which only Rp6, 5 trillion. This figure outside of SMS and data revenues. However, cellular service still has a substantial contribution, or approximately 40 percent of the total revenue available this quarter. In Telkomsel itself, and data services, voice and SMS grew approximately 9.3 percent.

Total subscribers reached 106.3 million TELKOMGroup, 24.3 million of which were fixed phone subscribers of 8.4 million and 15.9 million subscribers Flexi registration number. The rest are mobile subscribers, Telkomsel. While for the number of BTS Telkom, until March 2010, has reached 37 789 units, with the 5543 calculation units for Flexi and approximately 32 243 units for cellular base stations.

Telkom's own revenues in the first quarter of 2010 reached 16.6 trillion, up 6.25 percent over the same period last year amounted to 15.6 trillion rupiah, with net profit reaching 2.8 trillion, or only grew 13 percent from the same quarter a year and which reached Rp2, 5 trillion.
Firefox Mobile Operators Speedy Telkom Telkomsel