Telkomsel 4G LTE will be tested in June 2010 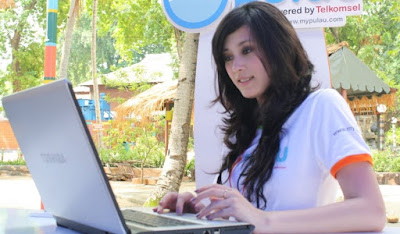 Tests fourth generation mobile technology (4G) or Long Term Evolution (LTE) conducted Telkomsel entered a final stage of readiness of the technology infrastructure that will be tested, such as: e-Node B, Mobility Management Entity (MME), System Architecture Evolution Gateway (SAE -GW), IP Multimedia Subsystem (IMS), and others. LTE trial preparation began in January 2010, and is expected before the end of the first semester of 2010 can already be tested download speed.

Testing LTE technology is part of a series of efforts in implementing the development of Telkomsel's cellular technology roadmap to higher levels. Beginning with the first 3G services commercially in Indonesia on November 14, 2006. Furthermore, Telkomsel launched its mobile broadband services "Telkomsel Flash" based on HSDPA technology (High Speed Downlink Packet Access) on April 6, 2007, and the project Telkomsel Next Generation Flash by implementing technology HSPA + (High Speed Packet Access Plus) in 24 cities starting 4 November 2009.

Before testing, Telkomsel has reviewed the technical and business LTE technology, especially the resource requirements, such as the allocation of frequencies to deploy LTE, needs new investment for the implementation of LTE, as well as leveraging existing investments that can be utilized for the development of LTE implementation. The whole effort was undertaken to support the development of future mobile broadband services require a very large bandwidth, such as: high-speed data up to 150 Mbps (downlink) and 50 Mbps (uplink) to support high definition video streaming, Voice over Internet Protocol (VoIP), and other applications requiring high speed data.

Looking ahead predicted LTE will bring significant changes in the telecommunications industry, where in the era of LTE development of data-based services will increase rapidly in line with the upgrading of the access technology. The development of data-based services is also determined by the various applications / service layer, such as: technology, IMS, Service Delivery Platform (SDP), and Cloud Computing. On the other hand, to develop a range of services to the front of the operator needs the support of partners such as content providers, applications and devices.
4G LTE Operators Telkomsel