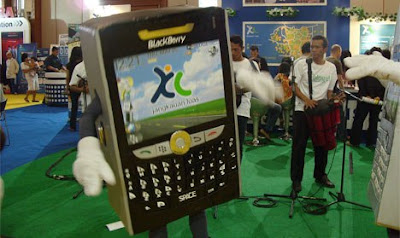 The growth of BlackBerry in Indonesia was phenomenal. For information, throughout 2009, we know that BlackBerry users (Internet Service) in Indonesia reached 600 to 700 thousand. That is, grows up to six times or 500 percent.

According to the latest report of XL, the number of customers the BlackBerry (BIS), as of March 2010, has touched the figure 310,000 subscribers and they claim to be the largest in Indonesia. Of that amount, it is known that 80 percent of whom are prepaid subscribers, and 20 percent of the rest are postpaid.

"The growth of BlackBerry users XL was fantastic. As of last November, we've had 200 thousand subscribers. But, now, within a period of approximately four months, we get 110 thousand new customers, "said Handono Warih, General Manager Sales & Internet Service BlackBerry XL in Jakarta.

This means that Warih said, there are approximately 30 thousand new subscribers who sign up each month BIS XL. "If it is averaged, the day we have the new BlackBerry 1000 customers," he said.
BlackBerry Operators XL