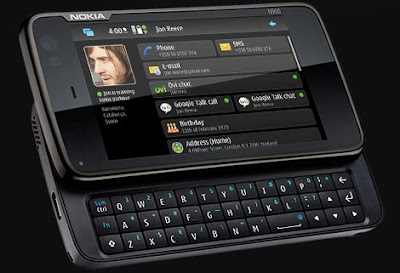 Leading mobile phone maker from Finland, Nokia, again making a new breakthrough. In the near future they will release a new series, the Nokia N900.

Once the sophistication of these products, so mention that this is a miniature version of a computer. No doubt the title as a mobile computer attached to this product. Features and advantages make it more suitable gadget called a portable computer than a phone.

Nokia N900 itself using Maemo operating system, which is based Linux. Maemo technology allows the Nokia N900 has a high performance result N900 allows users to perform a variety of things like being on the computer desktop, including the opening of various applications, for instant messaging, calendar, contacts, etc. simultaneously and without the constraint means. This is because the Nokia N900 has been equipped with high-capable processor at the heart of the main.

Features superior owned by Nokia N900 more complete as many offline and online applications can be opened quickly, to maximize results, this application memory can be added up to 1GB. Games on mobile enthusiasts also will feel the sensation of playing for fun in the 3D graphics accelerator technology in the Nokia N900 is very pampering eyes.
Nokia