BlackBerry OS 6.0 Appears on The Internet 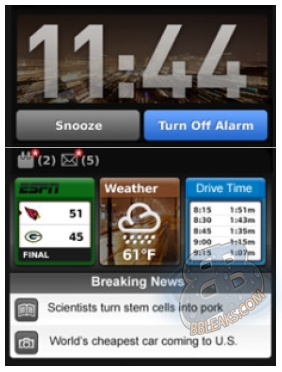 The latest version of the BlackBerry platform might be competing with the iPhone and the Nexus One. This is from two photographs mentioned display BlackBerry OS 6.0 as reported by BBLeaks.com site, Friday (19/3/2010).

Two photos show the front screen of the BlackBerry without showing his handset. However, judging from the size of the screen, which used similar handset Storm, or who was sailing Storm2 touch.

The first photograph shows a page filled with widgets from a variety of applications. Three widgets developed alongside the ESPN game results, weather information, and travel info. At the bottom of the widget extends the latest information. Another menu is a clock with large font sizes, alarms, and notification email and SMS. While in the second photo is also seen following Twitter message widget.

There are no any information about the development of the RIM BlackBerry OS 6.0 so far. Platform may be RIM's new weapon in the next product. RIM is reportedly preparing equipped BlackBerry slider below the touch screen QWERTY keypad. Will the BlackBerry slider using the latest OS version 6.0?
BlackBerry