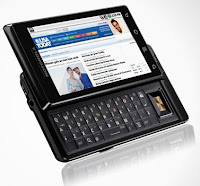 Motorola Inc. will split its business into two parts in the first quarter of 2011. One part will focus on the mobile phone business and television devices. The second part will emphasize the development of business networks.

Motorola says this corporate action aims to improve its position in the different market. "We believe that each business will receive the best position and managed to set a strategy to pursue opportunities and grow," said Greg Brown, Co-CEO of Motorola.

Motorola mobile devices business had drowned in the fierce competition that mobile phone industry recently intensively offers new smartphone product. After the launch of Razr, Motorola did not have a flagship product that could rival smartphone products. In fact, Droid, which was launched late last year, less successful.

The same condition also found in the business of television devices hit by the global crisis. Meanwhile, wireless network equipment business has been part of mobile operator business.

"It's hard to work with a company when you do not know where they will be one year from now. So, this step eliminates the uncertainty," said Mark McKechnie, an analyst with Broadpoint Gleacher. With the smaller divisions, operations can be more efficient Motorola.