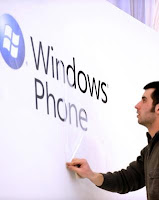 Smart phone owners (smartphones) are increasingly pampered with the launch of the latest operating system Windows Phone 7. This software has been redesigned user interface and incorporates many services such as Microsoft's Xbox LIVE games and Zune music service.

This software is introduced at an event at the Mobile World Congress in Barcelona, yesterday. According to research firm Canalys, Microsoft software currently has about 9% of the smartphone market.

"This is clearly a big step forward," said Pete Cunningham, Canalys analyst quoted by BBC News. According to him, Microsoft has really struggled with windows mobile 6 and the 6.5 version which was launched in October 2009, but has lost market share due to operating system made by superior competitors.

Now Microsoft Windows Phone 7 operating system offers the ability called 'live tiles', which in real time could be interesting content a website and social networking. In fact, users can create their own tiles to save the image and monitor the family in social networking.

Interface on Windows Phone 7 also have a series of hubs, which bring together relevant content from the web, applications, and services into a single view.
Windows Phone