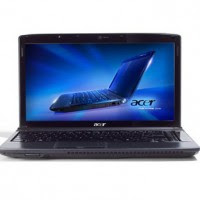 Acer has introduced a thin notebook that features the latest wireless connectivity, the WiMax. Has code-named Aspire 3810TG-732G64i, the notebook has a 13.3-inch screen size.

In Taiwan, the country where this notebook was first marketed, Acer will combine with the services of Vmax Telecom. For starters, Acer will focus to sell the notebook in Taipei City.

"The reason Acer is the focus in Taipei because the city is already available 200 WiMax base stations and reaches 85 percent of the city, "said Scott Lin, president of Acer Taiwan, as quoted by Digitimes, February 16, 2010.

In addition, Lin said, in the near future, 95 percent of the area will tercover Taipei WiMAX network.

For information, current number of notebook manufacturers including Acer, Asus, ECS, and MSI have launched a WiMAX-featured notebooks on the market. The market is already flooded with WiMax notebook is especially North America and Russia.
Acer WiMAX