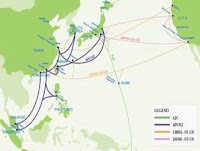 Network cable system SJC Sea, linking Singapore, Hong Kong, Japan and other Asian countries including Indonesia have the bandwidth capacity of 17 terra bytes per second (tbps) and can be increased up to 23 tbps.