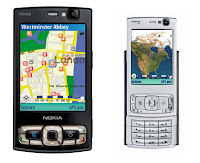 Nokia introduced the feature for free navigation on the phone in 74 countries. This step is a direct challenge to Google and all the GPS navigation industry.

The new version Ovi Maps, available in 10 new phone will be marketed in the next few weeks.

Information and details of the contents were obtained from partners including Lonely Planet and Time Out, all for free.

The map will include 180 countries, navigation will be available for 74 countries. In March, all GPS-enabled smartphone Nokia will include the new software.

"I hope this will be available globally, including in the United States," said Executive Vice President of Nokia Tero Ojanpera.

Not surprisingly, these Motorola plans to make shares of the GPS maker, Garmin Tomtom fell sharply due to the news.

Google got a lot of publicity recently when introduced free voice Guided navigation along with Motorola Droid. But Droid and GSM Doppelgänger, only available in some countries, while smartphone Nokia is the best-seller around the world.

Nokia 5800 for example, the almost unknown in the U.S., sold more than 3 million units in the first six months on the market in Europe and Asia, according to Nokia.

Nokia has offered Ovi Maps some time, in a service package with the Nokia 5800. But almost all Nokia phones that support voice-guided navigation, is charged monthly, including paying the guide content from Lonely Planet.

Now all the costs have been removed by Nokia.
GPS Nokia