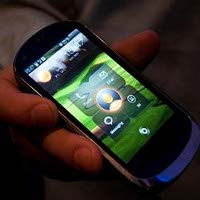 LePhone, the name most people would think that this phone made in France. But do not be fooled, because, although the prefix word 'Le' sounds coming from the country, but this is the first mobile phone made by Lenovo of China.

Yes, Lenovo had been formally entered the global handset market, with LePhone. Previously, Lenovo is better known as PC makers are now perched on four of the world.

The presence of this LePhone certainly enliven the competition will be more PC vendors who crossed into the mobile phone industry. Because, in addition to Lenovo, there are Dell and Acer, which has launched a handheld.

Lenovo own trust Android operating system as the platform. While from the processor, use powerful 1 GHz chip Snapdragon, Qualcomm made.

LePhone a touch phone that has a 3.7 inch wide screen. His initial appearance at the event is the International Consumer Electronics Show held in Las Vegas, United States 7-10 January 2010.
Gadgets LePhone