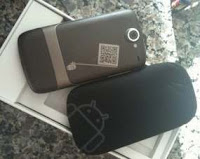 Finally Google phone specifications - Nexus One - the much talked about a lot of people were caught, too. Is Android phone to 1 Ghz processor is really going to be a formidable opponent in the smart phone market? Check the specifications.

Then if the specifications of this mobile brings a new surprise? The answer is no! Because the feature was carried Nexus One was not much different from the 'brothers' who have their first Android operating system, such as the HTC-made. Whereas previously the news scene heralded Google makes consumers think that Google would issue something new on the cell phone.

With Android OS 2.1 and faster processors Qualcom Snapdragon (QSD 8250) 1 Ghz speed, hopefully this phone not too disappointing consumers. Here are some data on Google's specifications Nexus One:

Nexus One rumored to be launched in the United States market starting January 5, 2010. Now that Google has had their own Android device, which not only will challenge the iPhone, BlackBerry, and Windows Mobile phone users. But also other Android users, such as Hero HTC, and Motorola Droid. Let's see the fight he said in 2010.
Google Phone