2012, Android Will Beat the iPhone 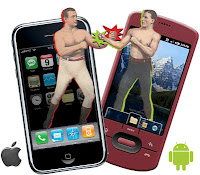 Android operating system is predicted to become the second largest force in the world, shifting the power of the iPhone in the year 2012. Some of the advantages offered by the power of Android to dominate mobile phone market.

World of technology consultants Gartner predicts Android will be above the iPhone, but still below the Symbian in 2012.

Android is a new operating system for mobile phones made by Google with an excess of open source. Developers can create applications for a diverse class. This new system in Indonesia in June 2009.
Android iPhone