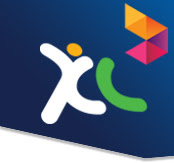 Income growth, one of which is triggered by an increase in the number of active base sucscriber (Revenue Generating Base - RGB), which still contributes ARPU (average revenue per user) for the company.

RGB is an active customer, one of which contributed income by the number of phone calls with outgoing minutes 63.4 billion minutes, up by 67% YoY. The rest, achieved revenue growth of other service features.

Along with income growth, XL also gained 3% YoY growth in EBITDA (earnings before interest, taxes, depreciation, and amortization) amounted to Rp 4.2 trillion, with EBITDA margin of 43%.