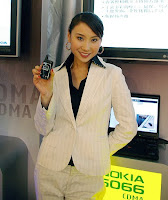 Nokia has just put out three quarterly financial report, is not encouraging, loss of U.S. $ 832 million. This report is a very drastic decline when compared with the same reporting period last year. In the third quarter of 2008, Nokia obtained a profit of 1.09 billion euros.

This decrease is due to a drastic decline in sales. Sales of Nokia phones that achieved in the quarter ended September 30 and that, just the number touched 9.18 billion euros, or down 20 percent from the previous year's sales reached 12.2 billion Euros.