Nokia E72 will be launched soon in Indonesia 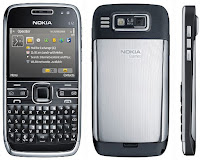 From the sales data owned by Nokia, stated that Indonesia is one country with a Nokia mobile phone sales growth highest.

In total, Nokia mobile phone sales growth in Indonesia was ranked fifth in the world, while in Asia, is in third position, below China and India.

According to the schedule of the Nokia headquarters, E72 is scheduled to slide at the end of this year, including in Indonesia.
connectivity Gadget Nokia technology