Nokia delayed the sale of the Nokia N900 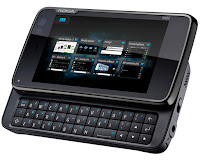 This delay is one month delay from the schedule already set. Nokia spokesman only said that it is now awaiting feedback from the developers.

September ago Nokia officially introduces new N series, named N900. The phone is expected to be the future of Nokia in the mobile market upper middle class.

This phone is also the first smart phone made by Nokia that use software based on Linux, Maemo 5.

This software promises performance superior handset. With Maemo 5, N900 users can have dozens of open windows and applications that run simultaneously.

N900 is equipped with a processor ARM Cortex-A8, up to 1GB memory applications and acceleration OpenGL ES 2.0 graphics. It produces a variety of equipment like a mobile computer multitasking.

The presence of Mozilla browsers make website look the same as when we access it using a computer. More profitable again, Maemo software can be updated automatically whenever the phone connected to the Internet.

For photography, a combination of software and technology N900 Maemo will help users get the picture clear and sharp from 5MP camera equipped with Carl Zeiss optics. Estimated, the Nokia N900 sold at a price approximately 500 euros.
connectivity Gadget Nokia technology