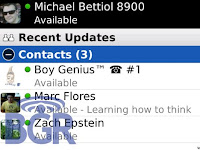 New Group Functionality - You can easily create or join a group to stay connected and share experiences in real-time. You can also chat and share location updates, address, calendar, photos, lists and more. One group can accommodate as many as 30 members. ?

Avatar - The user can adjust the display image as their personal avatar, which automatically appear on their contact. BlackBerry Messenger 5.0 also collect avatars of the existing contact in the BlackBerry contact