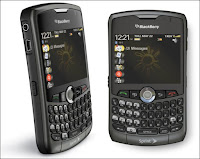 Smart has conducted trials on the BlackBerry CDMA network. Currently, Smart is still awaiting approval from the government.

BlackBerry Curve 8330 is a CDMA phone that works on the 800/1900 MHz frequency band and able to adopt technology EVDO (Evolution Data Optimazed), in addition to CDMA 2000 1x technology. EVDO is a third generation CDMA technology with a maximum access speed above 2 Mbps.

Not only that, this phone also offers Bluetooth connectivity and GPS but no WiFi. The phone plans are sold without UIM card slot (inject), and locked only for Smart subscribers. This phone will likely dibanderol for Rp 2.9 million.

The Curve 8830 is one of a full QWERTY phone from RIM is the most lightweight and small. The advantage, he can operate on two networks, namely GSM and CDMA 2000 1x, which can be used interchangeably (not dual stand-by). Possibly, this model sold for about Rp 3.3 million.

While BlackBerry Storm 9530 phone is dual mode (GSM and CDMA) first to use finger touch interface. Like the Storm model for GSM, smart phone equipped with a 3.2 megapixel camera. Will be sold for Rp 5.5 million.