West Sumatra Earthquake, Only Flexi and XL Still in Service 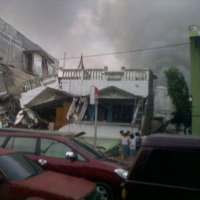 But after half an hour after the earthquake, the network proved XL and Flexi still in service.

7.6 Richter scale earthquake that shake the west coast of Sumatra was very strong. Residents who live in coastal chose to flee to the hills for fear there was a tsunami.

Information from the Board of Climatology, Meteorology and Geophysics, SR 7.6 earthquake occurred at 17:16:09 pm, Wednesday, September 30, 2009. The earthquake occurred at 0.84 south latitude location and 99.65 East Longitude. The epicenter was in the 57 kilometers southwest of Pariaman, West Sumatra.
Business connectivity Network technology