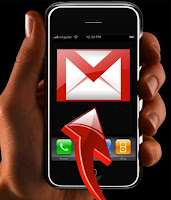 iPhone users and devices based on Windows Mobile (WinMo) use Google Apps can synchronize e-mail, contacts, and calendars on their handset. As such, they are much easier to update these three need when and wherever.

Recently, Google also announced an additional push mail feature on new devices that use Google Sync, which is a free application for Google Apps users.

This concept is actually pioneered by Research In Motion (RIM) a few years ago, in which the BlackBerry device has push mail feature and become the most popular tool for corporate users in the world.
iPhone