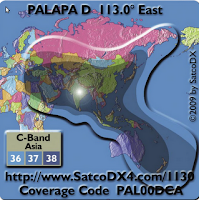 Indonesia, through a telecommunications company Indosat, has launched Palapa-D satellite. The launch is on a hill in Xichang, China. The first satellite owned national telecommunications company, was launched on Monday (31/8/2009) at 17:28 local time. Weather conditions at the Xichang also very supportive to do the launch. Satellite is expected to arrive at destination orbit BT 113.

Palapa-D satellite will replace the Palapa-C2 satellite which will run out of operations in 2011. Planning satellite starting in 2004 it will operate within the next 15 years.

Indosat will make the Palapa-D satellite for broadcasting services and cellular backhaul as basic services, VSAT services, DigiBouquet and telecast as a value added service, all intended to meet the needs of corporations in data communications and broadcasting.

As with the Palapa-C2 satellite, Palapa-D satellite will also be used as the backbone to support other Indosat services such as cellular, fixed telephone and fixed data.

Palapa-D manufactured by Thales Alenia Space France based Spacebus-4000B3 platform. Besides in Indonesia, Palapa-D has a range of ASEAN countries, Asian countries, Middle East and Australia.

This satellite weighs 4100 kg and 7500 watts of power. As a satellite launcher, Indosat use China Academy of Launch Vehicle Technology.
Satellite