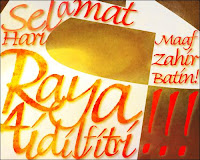 The government estimates that traffic will be achieved Lebaran telecommunications operator at the peak of Idul Fitri. Numbers will pass 1.5 billion SMS per minute.

As for voice calls, the total number is estimated to exceed 3 billion calls per minute. These estimates are based on data Indonesian Telecommunication Regulation Agency and the Directorate General of Post and Telecommunications for the spike in 2007 and 2008.