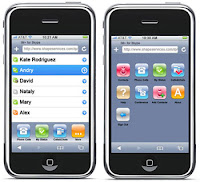 Skype is software that enables the world’s conversations. Millions of individuals and businesses use Skype to make free video and voice calls, send instant messages and share files with other Skype users. Everyday, people everywhere also use Skype to make low-cost calls to landlines and mobiles.

It’s hard to believe that the iPhone App Store is now a year old – for Skype, relative newcomer. On the 31st March 2009 Skype launched Skype for iPhone. Since then, it’s been downloaded over 4 million times, and more than 1 million users have registered on Skype using the app.

This means that Skype is now in the pockets of millions of people like you around the world, letting you take your Skype conversations with you on the go. If you haven’t already, you should download the latest version, which adds SMS and voicemail as well as support for 17 new languages.