The Indonesian market has seen phenomenal growth in recent quarters, but in Q1 09 there was a definite cooling off. The previous seven quarters had seen net additions in excess of 7m, with a peak of 14.94m in Q3 08, but in Q1 09 there was a gain of just 4.47m. This was the lowest figure since Q3 06. The total market reached 144.64m with penetration at 56.8%. Although Annual growth was still impressive at 41.0%, despite falling from 48.2% in the prior twelve-month period, but on a quarterly basis the uplift of 3.2% was the lowest for more than ten years.

This slump can be attributed to the performances of the second and third largest operators in the market, Satelindo and Excelcomindo (XL). Having seen impressive growth in recent quarters, particularly in Q2 08 when they added more than 10m customers on aggregate, both saw substantial net losses to their customer bases in Q1 09. Satelindo lost a massive 3.24m customers while XL was down 1.12m. Satelindo's loss was particularly worrying: although its second place is secure with 33.27m customers at the end of the quarter, more than 8.3m ahead of XL, in terms of market share it was down to 23.0%. This represented a 3.0pp quarterly loss. Moreover, it was the lowest figure the company has recorded since its very first quarter of operation in Q4 94.

By contrast, market leader Telkomsel put in a storming quarter, adding 6.83m customers. This was the second best result ever recorded on the Indonesian market, the best being the company's own Q3 08 gain of 8.06m. Having reached 60m customers in Q3 08 and 65m in Q4 08, Q1 09 saw Telkomsel smash the 70m barrier to finish on 72.13m. It thereby gained 3.3pp of market share in the quarter, although this was not quite enough to undo previous declines and it finished on 49.9%, down 0.1pp year on year. 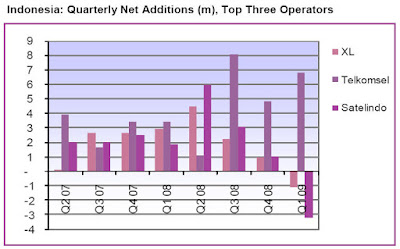 There were mixed results for the smaller operators. Natrindo added 1.05m to finish on 3.90m, thus closing in on Hutchison, which added 0.80m to finish on 5.31m. Meanwhile, amongst the CDMA operators Smart added 0.49m while Mobile-8 lost 0.45m, its third successive quarterly loss: this left Smart just 150k short of its rival on 2.05m.