Indosat Customers Can Use Mobile Phone in Air Plane 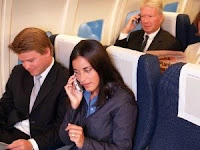 Indosat becomes the first operator in Indonesia to launch mobile phone service while in flight. This service is cooperation Indosat with AeroMobile, at the moment only for international flight.

Indosat should dive U.S. $ 12 million to build the telecommunications infrastructure base transceiver station (BTS) in the 48 plane. This is the access for mobile and BlackBerry when the flight takes place.

48 plane, which is referred to 47 aircraft owned Emirates airlines, and have a Malaysia Airlines plane. The two airlines that are partners in carrying out the Aeromobile cellular service in the aircraft for the first time in the world.