Windows Mobile 6.5 will be launched soon 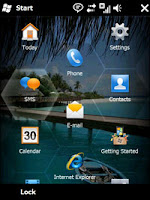 Microsoft has not released a new version for mobile since two years ago. Microsoft will soon launch a Windows Mobile version 6.5. But time is not yet determined.

There are two operational system that developed the latest version. That is the standard and professional versions. Standard version is intended for the smartphone is equipped with qwerty board, while the professional is for smart phone using the touch screen.

In addition to the operational screen that claimed more sophisticated from the previous, the new version also includes Microsoft Myphone service. Microsoft MyPhone is a free application that is in the Windows Mobile 6.5. With Microsoft MyPhone, customer data can be backup to the microsoft server. And that's free, but we need to make registration and synchronize.

Like previous versions, Microsoft did not release a Windows Mobile 6.5 to market directly, but through mobile phone vendors that use Windows Mobile as its operating system.
connectivity Gadget technology Windows Mobile