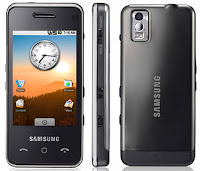 The Samsung I7500 offers users access to the full suite of Google services, while the integrated GPS receiver enables use of Google Maps features, such as My Location, Google Latitude, Street View, local search and detailed route description. Hundreds of other applications are available in Android Market.

Samsung said its smartphone i7500-based Android will be available in European countries starting June, but could have been obtained in Germany today. Not yet know when will be present in Indonesia.
Android connectivity Gadget technology