Palm Pre is coming soon in the market 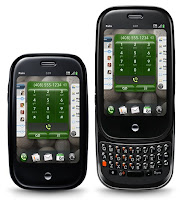 In the near future, Palm Pre will be released. It's opinion, this handset is better than iPhone. In terms of aesthetics and features, Palm Pre also has more advantages.

Different with other mobile phone vendors, Palm has not issued a new phone since the Treo was released in 2007. Palm Pre redesigned a massive, and the total change using the Linux called webOS.
connectivity Gadget technology