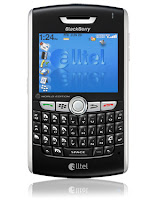 Indosat signed in the middle stage of finalization of the cooperation with Research in Motion (Rim), so that StarOne, which uses technology based on technology Code Division Multiple Access (CDMA) can access BlackBerry service.

From the technical side, access using a BlackBerry CDMA relatively no problems. Given that in the United States, for example, the BlackBerry service is accessed using the CDMA network technology.

The BlackBerry device on the market that already support the CDMA network access, among others, series 8130, 8330, 8830, 8930, and 9530.
BlackBerry Digital Platform platform technology