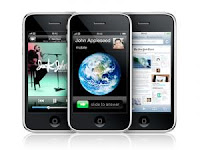 Telkomsel is appointed Apple to become the official distributor of the iPhone 3G will be launched on 20 March.

The latest 3G iPhone can be used throughout the Telkomsel network, both 2G and 3G, and is able to detect the network automatically Wifi hotspot, making it easier for high-speed Internet browsing and multimedia anytime and anywhere.

iPhone 3G is a combination of three products in one unit, ie, a revolutionary mobile phone, music device sailed wide, and a new breakthrough device that presents the experience of a stunning move the device.

With the 3G network speed, GPS map, and a variety of corporate features such as Microsoft Exchange, the iPhone 3G features a variety of services through a single touch of a finger.

Through access to App Store, there are tens of thousands of applications ranging from games to social networking, financial planning, and health management, which has been downloaded more than 500 million times so far. IPhone 3G at this time has been present in more than 70 countries around the world.
3G iPhone