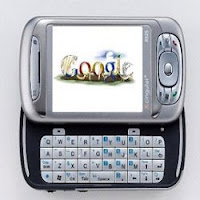 Google tried to overthrow the king of the mobile operating system that already have the Symbian and Windows Mobile. With the open operating system like Linux, Android start sought by many mobile phone manufacturers.

Products that have been issued is to use Android HTC, with products that are named G1. And this year will also be released Android based phones that Samsung and Motorola release, as well as other mobile phone manufacturers.

The development of Android software is expected to lower the selling price of mobile phone to reach a larger consumer. For Google to provide free to the hardware manufacturers to use the software.

Of course Google has a goal to eliminate Android software. Google Android produce to expand the coverage of Google services to the mobile internet market. With Android, Google expects a number of internet services more easily accessible to the user's mobile phone. When the use of Google services for mobile phone users has increased, Google is able to increase online advertising revenues it.
Android Gadget